For more than 700 years, the time-honored Royal Plowing Ceremony has been an annual event in front of the Grand Palace in Bangkok. The ancient Brahmanical rite is held during the sixth lunar month (around May, as the rice-growing season approaches) to produce bountiful crops and boost farmers’ morale. Rice is still vital to the lives, livelihood, and economy of Thailand, where rice farming remains the people’s main occupation.

At the beginning of the ceremony, the Phraya Raek Na (Lord of the Festival) performs a rite to predict the amount of rainfall during the coming season by selecting one of the three pieces of different-lengthened cloth that are covered with another piece of cloth in a tray held by a Brahmin astrologer. If the shortest one is chosen, rainfall will be abundant; rice in high area will be plentiful, but rice in low areas may be flooded. If the medium one is picked, rainfall will be average and rice abundant. It the long one is selected, rain will be scarce and rice in low areas plentiful and that in high areas suffer from drought.

Phraya Raek Na then wears the piece of cloth and proceeds to the plowing area, paying respect to his Majesty the King, who attaches great importance to these ceremonies, along the way. A pair of ceremonial bulls are yoked to a plow, and he begins to plow three concentric furrows and three crosswise furrows, and scatters rice seed from gold baskets carried by the four Nang Thepis (consecreted women) as he plows.

The bulls are unyoked after the plowing and then presented with rice seed, green beans, maize, hay, sesame seed, water, and rice liquor. What they eat or drink predicts the growing season. For example, if rice seed or maize are selected, cereals and fruit will be bountiful; if rice liquor, communication will improve, the economy will prosper, and foreign trade will increase.

After the ceremony, spectators rush onto the field and pick up the sacred rice grain to take home and mix with their rice seed for planting or to keep as hallowed items. 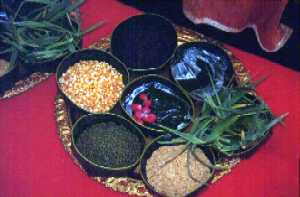 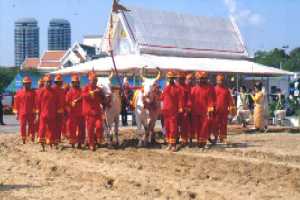 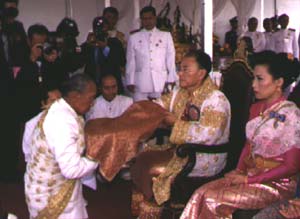