The consumption of rice, the staple food of the Korean diet, has continually decreased over the past few decades as the national diet has become more westernized.

The NSO attributed the decrease to rising consumption of instant food, processed meals and rice substitutes, including bread and noodles.

By type of household, a member of an average farm household consumed 135.4kg in the one-year period, 1.7 times more than the amount of rice consumption for a person living in a non-farming household.

The most rice was consumed in January, the month of the 2003 Lunar New Year, as the nation enjoyed traditional dishes such as ``tok,¡¯¡¯ a Korean cake made of rice. Per capita daily rice consumption stood at 238.1 grams for last January.

The average person skipped 20.8 meals in the cited one-year period, down 2.5 meals, or 10.7 percent from a year ago, as public concern on health rose, the NSO said. South Koreans passed over some two meals a month.

Per capita annual grain consumption registered 91.7kg in the cited period, down 7.4 percent or 7.3 kg from a year ago.

An average person consumed 1kg of barely and 0.6kg of multi grains, down 33.3 percent for each. Wheat consumption decreased 29.6 percent to 1.9kg. 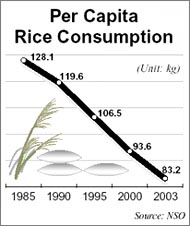